The Holdout – The Things That Brought Us Here 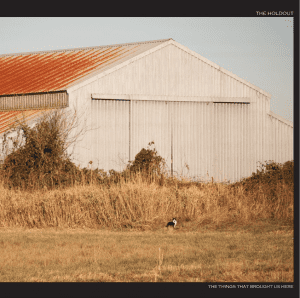 
Title: The Things That Brought Us Here

When Portland indie rockers Temper & Hold came to an end after their guitarist Jacob DePolitte moved from Oregon to Tennessee, it was only natural for the remainder of the band to find someone else and form a new project.

Aaron Blanchard (formerly of Prize Country, Junior Worship, etc.) was a best friend and a former bandmate of Jacob, so he seemed like the perfect match for Andi and Paul to start the new band with. From the rehearsal room and straight into the studio, The Holdout recorded and released their debut LP through Grafton Records in October 2018.

Musically, “The Things That Brought Us Here” offers eight songs that oscillate between the indie, punk and noise-rock essentials. After listening to the both Temper & Hold albums first, I can only say that The Holdout sound very similar, and I mean that in the best possible sense. The guitars are driving the atmosphere throughout the whole record. The vocals of Andi Camp (singer/bass-player) carry over it and the whole power trio lead the way without any artful complexities or songwriting pretensions.

What I really like here is  the 90s feel within the record and Andi’s voice somehow reminds me of Dahlia Seed, an amazing band from the early 1990s. On the other hand, I don’t remember any single song to standout on its own. Overall, the tracks are worth a listen but also sound a bit repetitive and easily forgettable when you put the needle back.

“The Things That Brought Us Here” is surely an expressive album with its own emotional strength, but I can’t find any truly memorable hooks throughout the whole record. It’s The Holdout’s first release though, so I hope they will come up with something slightly more exciting in the future.

I will still recommend this to fans of the 90s indie-rock vibe, but you shouldn’t expect something grandiose on here.

We need your help to continue. If you appreciate our work, please consider making a donation or pledge on Patreon by smashing one of the buttons down below.

Read this next More from author
Music Review

This website uses cookies to improve your experience. We'll assume you're ok with this, but you can opt-out if you wish. Accept Read More